The moon is only natural satellite of our planet Earth. Although our moon is not the largest natural satellite in the solar system, but it is the largest among all the natural satellites of major planets that is relative to the size of the object it orbits or the planets. The moon is actually a cold and rocky body. It is about 3,476 km in diameter. It does not have its own light, but it shines when the sunlight is reflected from its surface. Due to its thin atmosphere, temperature of the surface of the moon fluctuate heavily.

Which came first- Earth or Moon?

The moon is estimated to have formed approximately 4.5 billion years ago, not long after the formation of Earth. Although there have been several theories behind the formation of our moon in the past, the current most widely accepted explanation is that the moon is formed from the debris that was left over after a giant collision between Earth and a Mars-sized body which is named as Theia.

Internal structure of the moon

The moon consists of a distinct crust, mantle and core. The core of the moon is very small in size, consists of only one to two percent of the total mass. It is roughly 680 km wide. The core mostly consists of iron, but may also contain significant amounts of sulphur and other elements.

Its rocky mantle is almost 1,330 km thick and consists of dense rocks which are rich in iron, magnesium and several other elements. The crust on top has a depth of almost 70 km. The outermost part of the crust is broken due to all the huge impacts of asteroids and comets it has received.

Temperature of the surface of the moon

The moon has a very thin atmosphere. So, a layer of dust can sit here unmoved for centuries. Heat is not held near the moon’s surface because of this thin atmosphere; therefore, temperatures vary heavily. Temperature of the moon surface ranges from 134°C to -153°C. 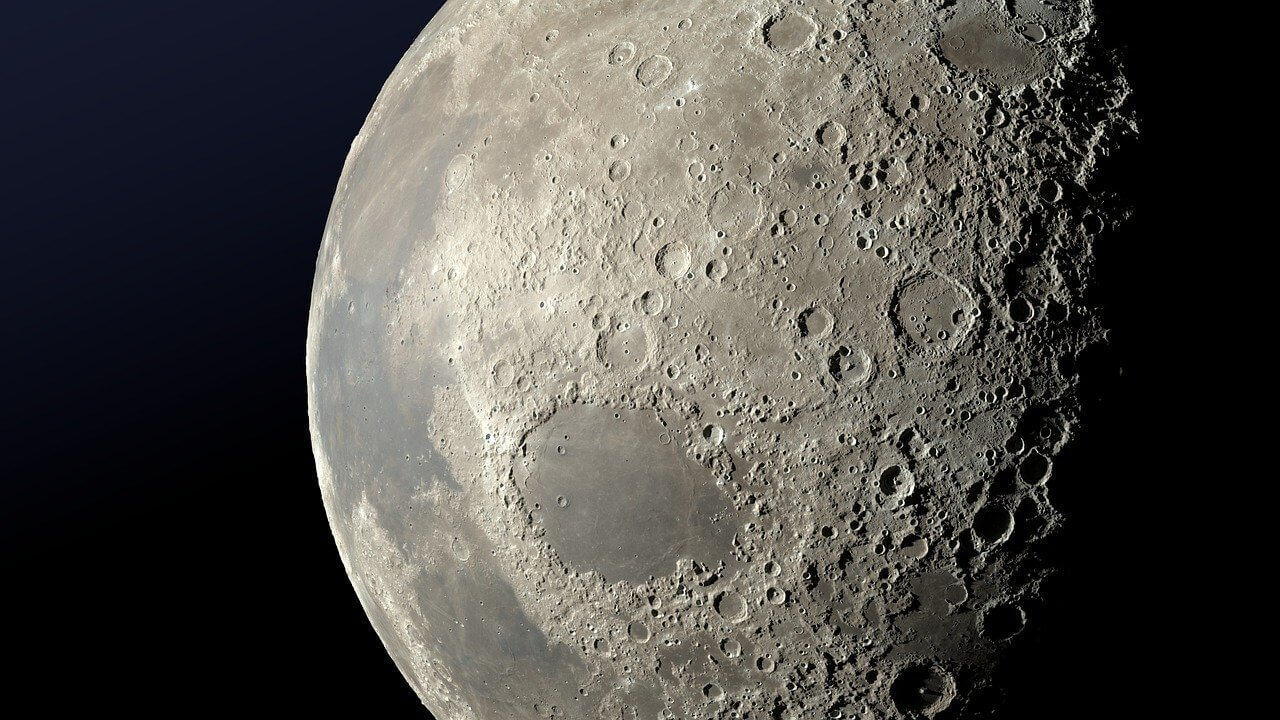 The moon has a much weaker gravity than our planet Earth, because of its smaller mass. We all know that an object on the moon would weigh about one-sixth (16.5%) of their weight on Earth.

How many phases of the moon are there?

One rotation of the moon on its axis takes the same amount of time that it takes to orbit Earth. Therefore, the same side of the moon always faces us. While it is orbiting the Earth, only its appearance keeps changing as sunlight falls on different areas on its surface.

When it faces the Sun, it is fully lit up and becomes the brightest. We refer to this phenomenon as the full moon. These changes in appearance are termed as the phases of moon. To complete an entire cycle of these phases, the moon takes almost 29 and a half days. 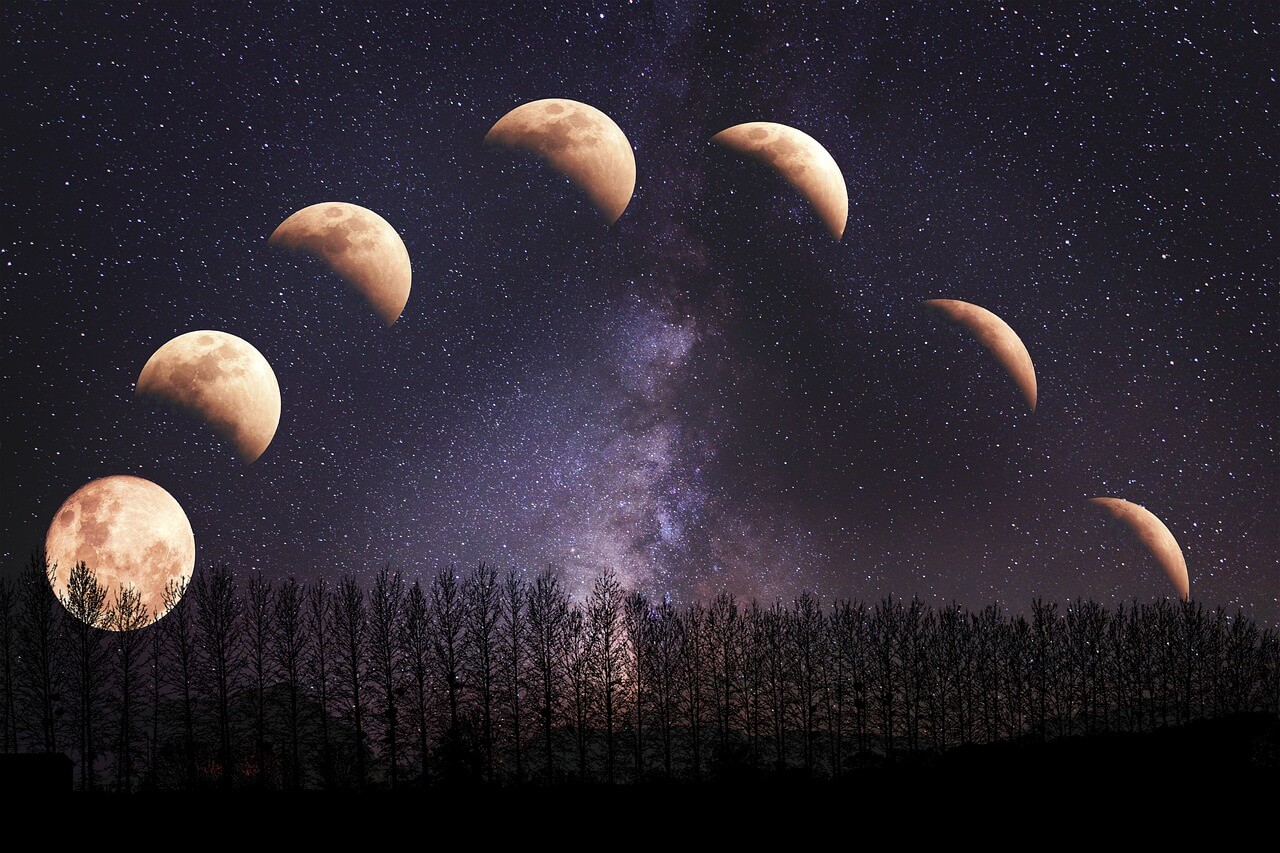 What is moon soil made of?

The surface of the moon is covered by a mud-like layer which is several meters thick. This mud-like substance is fine on the moon’s surface. As you go deeper from the surface, the size of the particles starts getting much bigger. Solid rocks are found at a depth of almost 16.4 feet from the surface and the soil is 32.8 feet deep in the mountainous regions.

The asteroids and comets hitting the moon’s surface resulted in soil getting formed at a rate of about 20 km per second. As a result of it, the rocks got crushed and craters were produced.

Surface of the moon

The moon’s surface took form a few years after the formation of the moon. A few billion years of continuous asteroid showers were followed by volcanic eruption from the moon’s interior. The spots that we see on the moon’s surface from Earth are the craters that are produced by the impacts of asteroids.

What is the blue moon?

According to modern mythology, a blue moon is the second full moon in a single calendar month which is obviously not a regular event. Naturally, there is only one full moon in a month. However, a second one could also happen. Full moons occur after a cycle of 29 days, whereas most calendar months consist of 30 or 31 days.

Therefore, two full moons can occur in a single month. On average, this phenomenon happens in every two and a half years.

Is the moon really blue?

The date of a full moon actually does not affect the colour of the moon. Usually, the moon on 31st July appears pearly-grey. Interestingly, there was a time, when blue moons are seen by people almost every night. Full moons, half-moons and crescent moons were all blue and it was not long ago. On some nights, it would appear green. 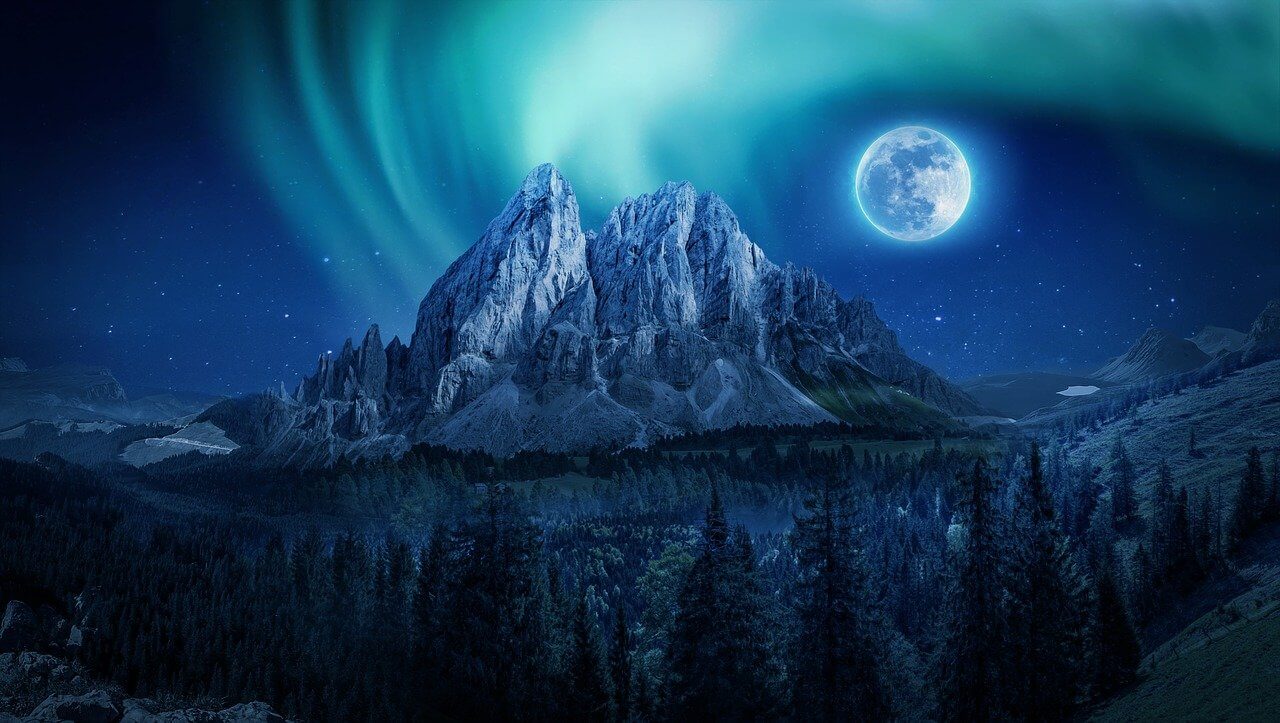 Why does the moon turn blue?

Krakatoa, an Indonesian volcano, exploded in 1883. Scientists estimate that the blast was almost equal to a 100-megaton nuclear bomb. Ash generated in this volcanic eruption reached to the very top of Earth’s atmosphere, making the moon turn blue. So, Krakatoa’s ash is the reason behind the blue moon. White moonbeams shining through the clouds appeared blue and sometimes green also.

Blue moons were observed for years after this eruption. Other small volcanic explosions have turned the moon blue as well. In 1983 blue moons were also observed after the eruption of the El Chichon volcano in Mexico. There are also reports of blue moons caused by Mt St. Helens in 1980 and Mt. Pinatubo in 1991.

1. There are about 168 natural satellites which orbit around the planets of the solar system.

2. Moon, the only natural satellite of our planet Earth, is the second densest satellite among those whose densities are known.

3. The word “month” is derived from the moon’s 29.5-day period of orbit around Earth. The phases of the moon are tracked on a lunar calendar and it is different from the Gregorian calendar.

4. Phobos, one of the two moons of Mars, is so small that although it is so closer to Mars as compared to any other moon and its planet, it only looks one-third the size of our moon when observed from Mars.

5. Deimos, the other and smaller moon of Mars, would be about as bright as Venus is from Earth at its brightest, i.e., “full moon”. However, both, Phobos and Deimos resemble asteroids more than moons.

6. Jupiter has total of 67 known moons. This includes four large moons known as the Galilean Satellites.

7. The Galilean moons are the largest and most massive objects in the orbit around Jupiter, with the remaining 63 moons and rings together comprising just 0.003 percent of the total orbiting mass around the Jupiter.

8. Io, the innermost of the four Galilean moons of Jupiter, is the only known body in the solar system besides Earth to have observed active volcanoes.

READ ALSO : Are there Volcanoes on Other Planets?

9. Io has the highest density among all the moons and is the driest known object in the solar system.

10. Europa is the smallest of the four Galilean satellites. The radiation level at the surface of Europa is sufficiently high which can result in severe illness or even death in human beings, who are exposed to it even for a single day.

11. Ganymede is larger than Mercury and Pluto, and only slightly smaller than Mars. It would easily be classified as a planet if it were orbiting the Sun rather than Jupiter.

12. Callisto, the outermost of the Galilean Moons, is roughly the same size as Mercury. The likely presence of an ocean within Callisto leaves a possibility that it could harbor life.

13. Titan is Saturn’s largest moon and has an atmosphere thicker than Earth’s.

14. The atmosphere around Rhea, the second-largest moon of Saturn, is so thin that oxygen is around five trillion times less dense than that found on Earth. It is the only moon that has oxygen in its atmosphere.

15. Caliban, one of Uranus’ many natural satellites, moves in an inclined orbit that is opposite to the rotation of Uranus. This reflects that it was not formed from Uranus but was a body captured by Uranus’ gravity.

16. Ariel is the fourth-largest moon of Uranus which has planetary mass and so would be considered as a dwarf planet if it directly orbited the Sun.

17. Miranda is the smallest and innermost of Uranus’s five round moons. It is 470 km in diameter & one of the smallest objects in the solar system, which is spherical and under its own gravity. Miranda’s low apparent magnitude makes it invisible to many amateur telescopes.

18. Umbriel is the third largest and fourth most massive of Uranian moons. Umbriel only reflects less than half amount of light compared to Ariel. Also, some images of this natural satellite show a mysterious bright ring about 140 km in diameter at one of its poles.

19. Triton is Neptune’s largest moon and it is also one of the very few moons in the solar system known and confirmed to be geologically active.

READ ALSO : Is Ganymede bigger than a Planet?